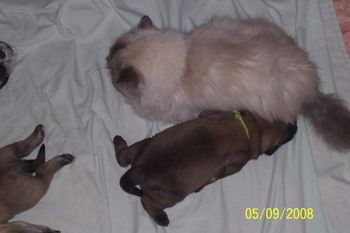 CERTIFIED THERAPY CAT retired Puddy Smykus is a lilac point himalayan kitty. He came into the clinic for a urinary problem. His owners were unable to care for him, so I adopted him. Dr. Hatfield actually "gave" him to me as a birthday present! He came in for his appointment on my birthday. His owners offered to give him up for Dr. Hatfield to place; so he came walking back with Smykus in his arms...I reached out my arms to hold him because he was so fluffy and cute!! Dr. Hatfield said, "Here you are M.C., Happy Birthday" LOL. End of story! Anyway, he only had that urinary problem once, and has been the picture of health. He is now 14 we think; and is beginning to have some kidney problems.He is the GREATEST, most friendly and attention seeking cat. He follows people around the house, when they are here to do maintenance things etc. Workers always like the fact that Smykus follows them around. He speaks on cue; he also likes to bring items of laundry up from the basement . He meows with his mouth full of clothing each time, as he comes up the steps. Then he drops the item in the kitchen and lets out a few big yowls. We always say, "Ohh, thank you Smykus!! Good boy!!" He seems happy with a job well done. He is one of the three remaining "Original" cats; our cats we brought with us from Chicago 10 years ago. Smykus is a retired Pet Partner with the Companion Animal Program of Cape Cod, a group which visits hospitals, nursing homes and assisted living centers to enrich the lives of the patients and residence. He loved going out and about! He and Horton have since retired, as yearly vaccines are required for such visitations and I've chosen not to vaccinate them more than every three years. (They live indoors and are elderly.) Puddy Smykus was euthanized in June of 2008, due to failing kidneys which we had managed for some time. The one thing that made me happy about his last days, was that he finally had the opportunity to be a "mother". It turned out that he really loved Patience's puppies, and spent alot of time in the whelping box snuggling with them. He surely liked the heat lamp , but he seemd to always be touching the puppies in some way too. When we moved them out of the box and into a big wire pen for some variety, Smykus followed them and was often in the pen with them. We had to pluck him out a few times, as he was covered in saliva from mewling puppies crawling all over him. He would close his eyes and sit there, purring. I miss everything about him, he was so fluffy, nice smelling, cuddly; like a living stuffed animal. I wish we could have had him forever. He was always just a perfect little boy. 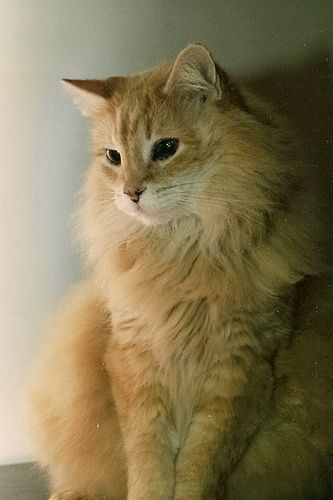 This is Geordie; quite possibly the most beautiful cat ever to walk the planet. He was the first pet of "my very own". I got him when I was in grade school, and had him up until I graduated from college and moved to Chicago. I have so many stories about him. He was in my life during such a critical time, through many changes and dramas; he was extremely important to me and I loved him wholly. I took him on Spring Break in college...just me and Geordie; we went on a cross country road trip. Everyone else went to Florida back then; not me. What would Geordie have done in FLORIDA? Instead he slept on the back dash and used his litterbox on the back seat floor. He became a diabetic later in life, and we dealt with that for years and happily so; I would have done anything for him. He ultimately succumbed to heat stroke during a terrible heatwave in Chicago back in the 90's. Many people and animals died. There were such huge blackouts, many air conditioned places had no power ( incuding my building). Because of his diabetes, he was a poor thermoregulator, and he couldn't handle the added stress. It was a terrible time, people dying in my building and I felt such grief over losing my Geordie, but guilt for feeling so badly when human lives were being lost. While Geordie's end was not a perfect one, he definately had a great life....he grew up in the country, being my only cat to ever be allowed outdoors...he escpaed that upbringing without getting killed....he went to college at Penn State, on a completely Free Ride..he went on many vacations and road trips; then moved to the city for the later part of his life and greatly enjoyed the views on the courtyard from his many window perches. He is the reason why I will NEVER have another "orangey". He was simply the Best. Still missing you, Geord. (Thank you Greg, for coming over and taking care of him for me that day.) 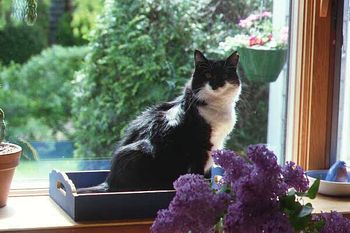 Beautiful and silly Two Fish! Two Fish was named Mischief by her first owners. She was given up in a divorce. I went to work one day and my boss said she had received a horse trailer and a cat, as a product of someone's divorce....did I want either one? I don't have a horse, so I took the cat. Two Fish did NOT like canned food, ate only dry food every day. She was portly and was Ron's first "daddy cat". She preferred him to me, and would sleep with Ron and wait up for him at night when he worked late. She would follow him around the house and adored him. In our old house, she would hang out on top of the kitchen cabinets, watching the goings-on from her perch. She broke daddy's heart when she left us;I was away at the time and poor Ron had to do it alone; it was unexpected as she gave us no sign that she had a large tumor in her abdomen. We'll always remember you, Wishy, and miss you very much as well! 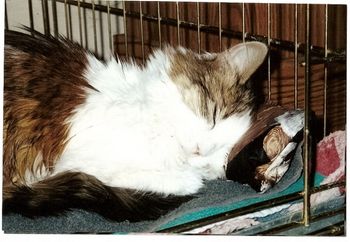 PInto Bean was such a sweet and pretty little girl. I found her, along with a litter of babies, hiding behind a shrub in the middle of Chicago. I was on my way to work, and had a backpack with me. I picked the family up and stuffed them in! They were mewing like crazy as I rode the bus to the animal hospital; they totally crushed my lunch and began eating it in the backpack! :) Her four baby kittens all got adopted, by this nice young guy who wanted ONE cat....he couldn't separate them. I took Pinto Bean home, as I always have a soft spot for the mommas, whose babies get adopted and no one seems to care about the mom. She was a treasured member of our clan here. She died of lymphoma when she was around 10 years old. 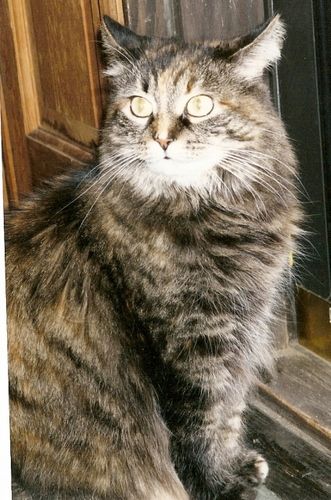 Sugar Lips was an adorable long haired tortie. We adopted her from the Animal Rescue League, along with Seal ( who will be up here soon). Sugar Lips was a very flirtatious and friendly cat who always purred and wanted to be rubbed. ONe of her favorite things to do was to sit on the fishtank. When she got very sick near the end, and too weak to jump on and off the fish tank, we made a special little place for her that would be safe which enable her to still enjoy her fishtank seat up until the end. 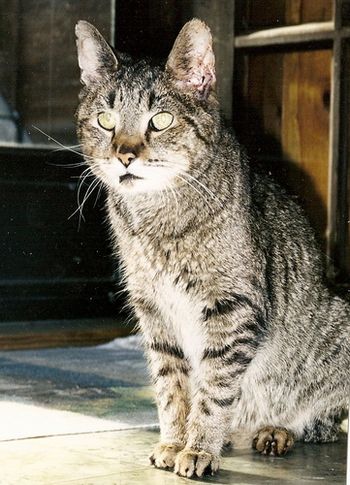 Tom-Tom. This one is so hard to write; there are certain cats that just blow you away...and he did. First of all, he had the tiniest feet. He had a broken jaw and was feral when he came into the clinic. He was absolutely the most freaked out cat you've ever seen. He had survived on dumpster fare and probably been kicked in the head. He was destined for a shelter; the volunteer would come and we would force him into another carrier; then he'd sit in a car for an hour ; get out at the shelter and be restrained to have a Feline Leukemia, FIV test drawn; which I KNEW would be positive...then he would be restained again and stressed out and euthanized. The shelter wouldn't let us do the test prior to relocating him, for financial reasons. I stepped up and said, wait, this is nuts. I'll pay for the test. That way, when it's positive, we can put him down here and spare him all of the extra torture. I was shocked that it was negative. And of course, by that time I was already thinking, no one will EVER adopt a cat like this from a shelter! He will sit in a No Kill shelter for the rest of his LIFE! So, I took him home. I said to myself, there is a good chance that this cat is too fearful to have a good life. If he can't relax after a certain period of time, I'll put him down because it's not RIGHT for an animal to live in such fear. I brought him home and he went under the bed. At night, when we slept, we could hear him creep out...crunch, crunch ,crunch........peeeeeee....scritch scratch scritch...back under the bed. He did this for a week. Then I had to go on a trip, and left him with Ron and the other kitties. The first night I called Ron. He was laying in bed as we talked...he said, "Guess who's on the bed?" I said, "Stinky?" He said "Yes, and who else?" I said, "Geordie?"He said, "YESS, but come ON! Who else is on the bed??" I said, "I don't know!!" He said, "The Tom Cat!" ( he had no name yet). And so, it began. He slept with us every night. For YEARS, he slept ON MY ACTUAL HEAD. He gave the best massages with his little tiny , strong, round feet. I mean, he really pushed hard and would rub my back and shoulders for me. He was in such ecstasy , he would drool. He played "catch me" with me. I would run into another room, and he would FLY at me and leap into my arms, drooling. I would rub him, then put him down and run away. He would FLY at me again and jump into the air, knowing I'd catch him. He would rub me and drool on me. It'd been a few years since I lost him but it is so raw still, as I sit here and remember these things. He was a devastating loss for me. There was just something about him; going though that loss was excruciating. He was eventually put down, due to a confluence of multiple problems common in older kitties.